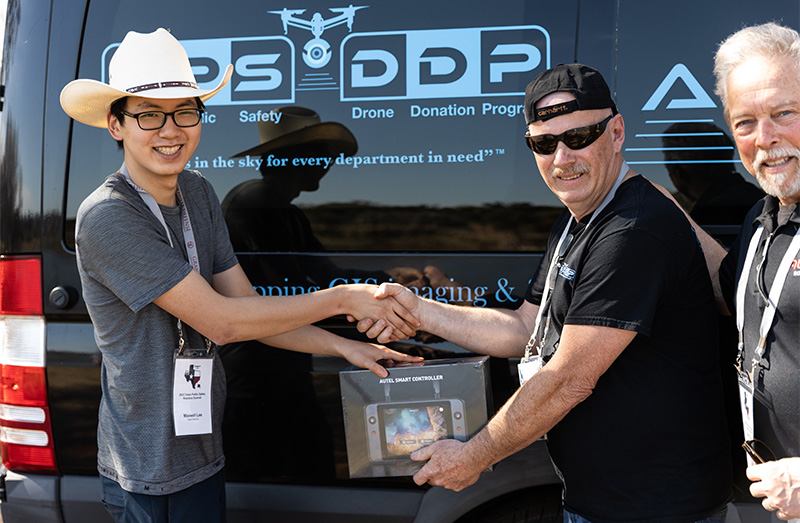 Charity works across the drone industry to raise funds and aircraft for public safety agencies.

BOTHELL, Wash. (February 25, 2022) — “Government contract” is the highest goal of many aerospace companies. It brings to mind high budgets, consistent business, and big fleets. Premium drone companies are designing high-end drones for big-city first responders, and they’re making good money doing it. However, in the rush to create drones for large organizations with big budgets, smaller departments and agencies with tighter budgets can be easily overlooked.

In recent years, drones have helped make public safety workers’ jobs easier, faster, and safer. They can provide overwatch on dangerous missions, used in search and rescue operations,  and map crash sites and crime scenes in a fraction of the time it would take more traditional methods. The list goes on and on. They can also operate at a fraction of the cost, noise levels, and risk of a helicopter. All in all, drones are revolutionizing the way first responders work and adopters of this technology are always finding new ways to solve problems with their aircraft.

National Public Safety Drone Donation Program (NPS-DDP) was created to provide underfunded public safety agencies with essential UAS and drone equipment. With help from donors and industry partners, the organization has donated dozens of drones to departments around the country.

NPS-DDP’s latest donation was a thermal-equipped EVO II to the Cahaba Valley Fire Department near Birmingham, Alabama. NPS-DDP coordinated with a company that had a drone it no longer needed. Spire Energy was using an EVO II with a thermal camera, but their workflows had evolved to the point they no longer required the drone. Rather than dispose of it, they talked to their supplier, who directed them to NPS-DDP.

A department representative thanked their donor and NPS-DDP in a public address. “Getting this piece of equipment is going to be very useful for us…As a lot of you know, this past week we’ve been dealing with wildfires in our community. This piece of equipment right here can really help us out with spotting the fire, seeing the flanks, seeing how far the fire is spreading, what homes are in danger, especially with thermal imaging that’s on this camera. [It can] also give us the ability to account for our personnel that are in the woods, with the thermal imaging, we can see our people, where they are, where they’re deployed, and make it safer for them.

The EVO II will also be used for search and rescue missions in the county’s recreation areas.

“In our community, we have about 500 acres of walking and hiking trails…one of the services we provide here is wildland search and rescue for those trails. This will help if somebody is injured or lost on the trails, we can fly this drone, help spot them, help direct our crews to get those people out, and make rescues a lot quicker.”

Despite the successes and the growing popularity of drones, many departments don’t have the budget to invest in aircraft, pilot training, and program development. In 2020, the average purchase price of drones in the $500-$100,000 range is $8,109, according to DroneAnalyst’s 2020 market report. That represents an increase of almost $6,400 from 2019’s average purchase price of $1,718.

According to the same report, most drone programs start small: over half have a budget of $10,000 or less. Even though drones are proving their usefulness in more and more cases, finding a program on a tight budget isn’t feasible, politically or financially, for some departments.

“Many of the departments that we work with are volunteer fire departments,” said NPS-DDP’s CEO Marc Langley. “And they are doing bingo nights and chicken bakes for life-saving hardware. Our foundation is here for making sure they have these life-saving tools; as a bare minimum eyes: the sky for every department.”

At Autel Robotics, we are proud to work with NPS-DDP and all our drone industry partners to donate life-saving equipment to underfunded public safety agencies. We encourage anyone who has a drone they're no longer using to donate to NPS-DDP to help support firefighters, police, and other public safety entities in our communities.

For more information about the National Public Safety Drone Donation Program, visit their website or contact them at info@nps-ddp.org or 669-235-9482.

Autel Robotics is a team of industry professionals with a genuine passion for technology and years of engineering experience. Since its founding in 2014, Autel has always striven for customer-driven innovation and is continually working to raise the industry standard for drones. The company’s headquarters is in Shenzhen, the heart of China’s tech industry; it also has R&D bases around the world including

Drone Technology is advancing rapidly with new products and services being introduced regularly. As the owner of a drone company,  Airborne Works, we see this industry from the inside looking out and fully recognize the value that drone technology brings to public safety.

The National Public Safety Drone Donation Program and NPS-DDP.org was founded as a result of recognizing, #1 the need for this technology, #2 the shortfall in funding of this technology for many departments across the country. The mission established by our distinguished Board of Directors for NPS-DDP  echoes this belief in our foundation statement with the vision and  determination to help place. “Eyes in the sky for every department in need.”